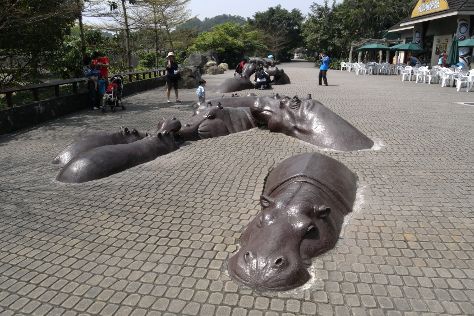 Attractions like Taipei Zoo and Taipei Children's Amusement Park make great kid-friendly stops. Change things up with these side-trips from Taipei: Chiufen (Jiufen Old Street) (in Ruifang), YehLiu Geopark (in Wanli) and Keelung River (in Bali). Spend the 20th (Thu) exploring nature at Yangmingshan National Park. Pack the 22nd (Sat) with family-friendly diversions at Leofoo Village Theme Park. There's still lots to do: pause for some photo ops at Chiang Kai-Shek Memorial Hall, see BabyBoss, hunt for treasures at Shilin Night Market, and buy something for everyone on your list at Taipei 101.

If you are flying in from Singapore, the closest major aiports are Taiwan Taoyuan International Airport, Taipei Songshan Airport and Taichung Ching Chuang Kang Airport. In December, daily temperatures in Taipei can reach 23°C, while at night they dip to 18°C. Wrap up your sightseeing on the 26th (Wed) early enough to travel back home.
more less