Your day by day itinerary now includes Carabela Cafe as well as La Boqueria. Get ready for a full day of sightseeing on the next day: pause for some serene contemplation at Barcelona Cathedral, take a stroll through El Barri Gòtic, then shop like a local with La Boqueria, and finally admire the striking features of Basilica of the Sagrada Familia.

Plan a Barcelona trip in moments using our itinerary builder.

San Francisco, USA to Barcelona is an approximately 14.5-hour flight. The time zone difference moving from Pacific Standard Time (PST) to Central European Standard Time (CET) is 9 hours. In December in Barcelona, expect temperatures between 59°F during the day and 43°F at night. You will have some time to spend on the 21st (Sat) before leaving for Seville.
more less

Your day by day itinerary now includes Mercado de Triana, Royal Alcázar of Seville, Casa de Pilatos, and other attractions you added. There's still lots to do: steep yourself in history at Plaza de España and pause for some serene contemplation at Catedral de Sevilla.

Find out how to plan Seville trip without stress by asking Inspirock to help create an itinerary.

Fly from Barcelona to Seville in 4 hours. Alternatively, you can take a train; or drive. Expect a daytime high around 61°F in December, and nighttime lows around 45°F. You will have some time to spend on the 25th (Wed) before leaving for Granada.
more less

Your day by day itinerary now includes Albayzin, Sacromonte, Alcaiceria, and other attractions you added. There's lots more to do: steep yourself in history at Alhambra, take in nature's colorful creations at Generalife, admire the landmark architecture of Royal Chapel of Granada, and don't miss a visit to Plaza de Isabel La Catolica.

For reviews, ratings, and other tourist information, refer to the Granada trip itinerary tool.

Getting from Seville to Granada by car takes about 3 hours. Other options: take a bus; or take a train. Traveling from Seville in December, expect Granada to be a bit cooler, temps between 56°F and 36°F. You will have some time to spend on the 29th (Sun) before leaving for Madrid.
more less 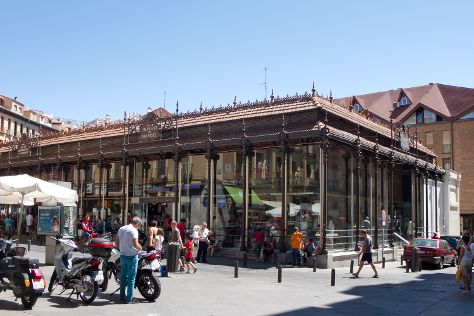 Your day by day itinerary now includes Palacio De Cristal. Kick off your visit on the 29th (Sun): walk around Parque del Retiro, then admire the striking features of Palacio De Cristal, and then browse the eclectic array of goods at Mercado San Miguel.

To see reviews, more things to do, photos, and more tourist information, use the Madrid day trip planning site.

You can fly from Granada to Madrid in 4 hours. Alternatively, you can drive; or take a bus. In December in Madrid, expect temperatures between 54°F during the day and 37°F at night. You will leave for home on the 30th (Mon).
more less