In many ways the most modern of Italian cities, Milan is a busy, elegant metropolis with an impressive list of grand palaces, fine churches, and important museums.

Kick off your visit on the 29th (Sun): get to know the fascinating history of Piazza del Duomo, then pause for some serene contemplation at Duomo di Milano, and then stroll the grounds of Monumental Cemetery. On your second day here, steep yourself in history at Il Cenacolo, explore the historical opulence of Castello Sforzesco, then get engrossed in the history at Basilica di Sant'Ambrogio, then steep yourself in history at Chiesa di San Maurizio al Monastero Maggiore, and finally admire the landmark architecture of Galleria Vittorio Emanuele II.

To find other places to visit, photos, ratings, and other tourist information, you can read our Milan online trip itinerary maker .

If you are flying in from Canada, the closest major airports are Malpensa International Airport, Milano Linate Airport and Il Caravaggio International Airport. In September in Milan, expect temperatures between 28°C during the day and 16°C at night. On the 1st (Tue), you're off toLucerne.
more less

Things to do in Milan

Your day-by-day itinerary now includes Jungfraujoch as well as Mt Pilatus. Kick off your visit on the 1st (Tue): take your sightseeing to a higher altitude at Jungfraujoch. Get ready for a full day of sightseeing on the next day: take in the awesome beauty at Mt Pilatus.

To see photos, maps, where to stay, and more tourist information, go to the Lucerne road trip planning website .

Getting from Milan to Lucerne by car takes about 3 hours. Other options: take a train; or take a bus. Prepare for slightly colder weather when traveling from Milan in October: high temperatures in Lucerne hover around 17°C and lows are around 8°C. Finish up your sightseeing early on the 2nd (Wed) so you can go by car to Zurich.
more less

Things to do in Lucerne

Jungfraujoch
Find places to stay Oct 1 — 2:
Hotels on TripAdvisor
Homes on Airbnb
Highlights from your plan

The financial hub of Switzerland, Zurich is most often associated with money and banks.

Kick off your visit on the 3rd (Thu): wander the streets of Old Town. Get ready for a full day of sightseeing on the next day: contemplate the waterfront views at Lake Zurich, admire the striking features of Fraumünster Church, then take an in-depth tour of Landesmuseum, and finally take in the architecture and atmosphere at Grossmunster.

For where to stay, photos, maps, and more tourist information, go to the Zurich holiday tool .

You can drive from Lucerne to Zurich in an hour. Another option is to take a train. October in Zurich sees daily highs of 17°C and lows of 8°C at night. Finish your sightseeing early on the 4th (Fri) to allow enough time to drive to Innsbruck.
more less

Things to do in Zurich 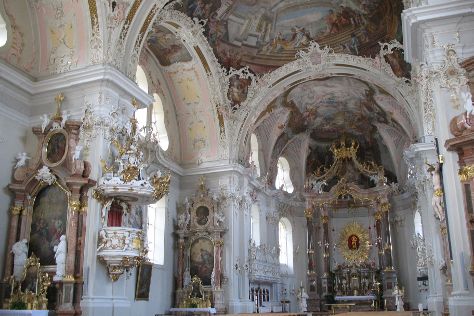 Nestled in a valley between snowcapped peaks, Innsbruck evokes visions of a winter wonderland.

To see reviews, traveler tips, where to stay, and tourist information, you can read our Innsbruck trip app .

Traveling by car from Zurich to Innsbruck takes 3.5 hours. Alternatively, you can take a train; or take a bus. In October, daytime highs in Innsbruck are 18°C, while nighttime lows are 6°C. On the 5th (Sat), wrap the sightseeing up by early afternoon so you can take a train to Munich.
more less

Things to do in Innsbruck

Village of a Million People

Often described as the city of laptops and lederhosen, Munich is an international center of business, engineering, research, and medicine that still maintains a rich cultural heritage and age-old traditions.

Your list of things to see and do now includes Dachau Concentration Camp Memorial Site, St. Michael's Church, Asam Church, and other attractions. On the 6th (Sun), steep yourself in history at Dachau Concentration Camp Memorial Site, see the interesting displays at Munich Residenz, then take in the spiritual surroundings of St. Peter's Church, then admire the striking features of Asam Church, and finally contemplate in the serene atmosphere at St. Michael's Church. Keep things going the next day: contemplate the long history of Schloss Neuschwanstein, don't miss a visit to Marienplatz, and then enjoy breathtaking views from Frauenkirche.

For where to stay, photos, other places to visit, and other tourist information, you can read our Munich trip planner.

Take a train from Innsbruck to Munich in 2 hours. Alternatively, you can drive; or take a bus. Expect a daytime high around 16°C in October, and nighttime lows around 5°C. Finish your sightseeing early on the 8th (Tue) to allow enough time to travel to Prague.
more less

Things to do in Munich

Your day-by-day itinerary now includes Lesser Town, Dancing House and Golden Lane. Start off your visit on the 8th (Tue): don't miss a visit to Prague Astronomical Clock, wander the streets of StaromEstske namEsti, then admire the landmark architecture of Dancing House, and finally wander the streets of Lesser Town. Get ready for a full day of sightseeing on the next day: contemplate the long history of Prasna brana, take in the exciting artwork at Lobkowicz Palace, explore the historical opulence of Prague Castle, then contemplate in the serene atmosphere at Katedrala Svateho Vita, and finally make a trip to Golden Lane.

Traveling by flight from Munich to Prague takes 3.5 hours. Alternatively, you can drive; or take a train. In October, daily temperatures in Prague can reach 15°C, while at night they dip to 7°C. Finish up your sightseeing early on the 10th (Thu) so you can travel to Vienna.
more less

Your day-by-day itinerary now includes Historic Center of Vienna, Peterskirche Wien and Karlskirche. Kick off your visit on the 10th (Thu): contemplate the long history of Belvedere Palace, then contemplate in the serene atmosphere at Church of the Jesuits, then take in the architecture and atmosphere at St. Stephen's Cathedral, and finally take a stroll through Historic Center of Vienna. Keep things going the next day: admire the landmark architecture of Schonbrunn Palace, take in the spiritual surroundings of Karlskirche, then see the interesting displays at Kunsthistorisches Museum Wien, then see the interesting displays at Imperial Palace (Hofburg), and finally take in the spiritual surroundings of Peterskirche Wien.

For where to stay, other places to visit, maps, and tourist information, go to the Vienna online itinerary builder .

You can fly from Prague to Vienna in 3 hours. Alternatively, you can drive; or take a bus. In October, daytime highs in Vienna are 17°C, while nighttime lows are 8°C. Wrap up your sightseeing on the 12th (Sat) to allow time to take a train to Budapest.
more less

Pearl of the Danube

You might consider the city of Budapest, divided by the Danube River into two distinctive cities--Buda and Pest--to be essentially one large World Heritage Site.

Your day-by-day itinerary now includes Buda Castle, Hungarian Parliament Building and Vajdahunyad Castle (Vajdahunyadvar). Start off your visit on the 12th (Sat): step into the grandiose world of Vajdahunyad Castle (Vajdahunyadvar), then appreciate the history behind Hősök tere, then take in the spiritual surroundings of St. Stephen's Basilica (Szent Istvan Bazilika), and finally contemplate the long history of Halaszbastya. Get ready for a full day of sightseeing on the 13th (Sun): get a sense of history and politics at Hungarian Parliament Building, take an in-depth tour of In memoriam 1956. October 25. Memorial and Exhibition, pause for some photo ops at Shoes on the Danube, then explore the historical opulence of Buda Castle, then take in the spiritual surroundings of Matthias Church, and finally contemplate in the serene atmosphere at Dohány Street Synagogue.

Start your trip to Budapest by creating a personalized itinerary on Inspirock.

You can take a train from Vienna to Budapest in 2.5 hours. Alternatively, you can drive; or take a bus. In October, plan for daily highs up to 19°C, and evening lows to 7°C. You will leave for home on the 14th (Mon).
more less

Things to do in Budapest