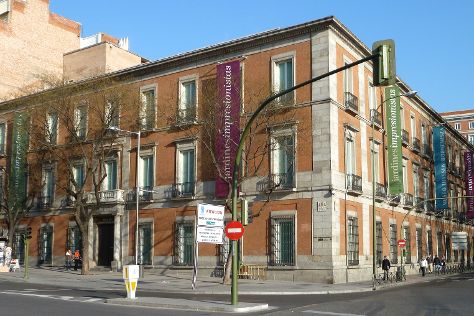 You'll find plenty of places to visit near Madrid: Toledo (Catedral Primada & Church of Santo Tomé) and Acueduct of Segovia (in Segovia). And it doesn't end there: stroll around Parque del Retiro, admire the masterpieces at Museo Nacional Centro de Arte Reina Sofia, get the lay of the land with Walking tours, and don't miss a visit to Puerta del Sol.

To find maps, more things to do, traveler tips, and other tourist information, you can read our Madrid trip itinerary site.

San Juan, Puerto Rico to Madrid is an approximately 12.5-hour flight. Traveling from San Juan to Madrid, you'll lose 5 hours due to the time zone difference. Traveling from San Juan in December, expect Madrid to be much colder, temps between °C and °C. You'll have a few hours on the 1st (Wed) to wrap things up before traveling to Seville.
more less

Toledo, Acueduct of Segovia
Find places to stay Dec 28 — Jan 1:
Hotels on TripAdvisor
Homes on Airbnb
Highlights from your plan

Kick off your visit on the 1st (Wed): enjoy breathtaking views from Torre Giralda and then take in the architecture and atmosphere at Catedral de Sevilla. Keep things going the next day: admire the natural beauty at Parque de Maria Luisa, take in the local highlights with Walking tours, and then admire the landmark architecture of Setas de Sevilla (Metropol Parasol).

For ratings, where to stay, traveler tips, and other tourist information, you can read our Seville holiday maker site.

You can fly from Madrid to Seville in 3.5 hours. Other options are to take a train; or drive. Prepare for a bit warmer weather when traveling from Madrid in January: high temperatures in Seville hover around °C and lows are around °C. On the 3rd (Fri), you'll travel to Ronda.
more less

For photos, more things to do, where to stay, and more tourist information, read our Ronda journey planning site.

Traveling by car from Seville to Ronda takes 2 hours. Alternatively, you can take a bus; or take a train. In January, daytime highs in Ronda are °C, while nighttime lows are °C. Finish up your sightseeing early on the 4th (Sat) so you can go by car to Granada.
more less

For traveler tips, reviews, more things to do, and tourist information, go to the Granada day trip site.

Traveling by car from Ronda to Granada takes 2.5 hours. Alternatively, you can take a train; or take a bus. Prepare for little chillier weather when traveling from Ronda in January: high temperatures in Granada hover around °C and lows are around °C. Finish your sightseeing early on the 6th (Mon) so you can drive to Murcia.
more less 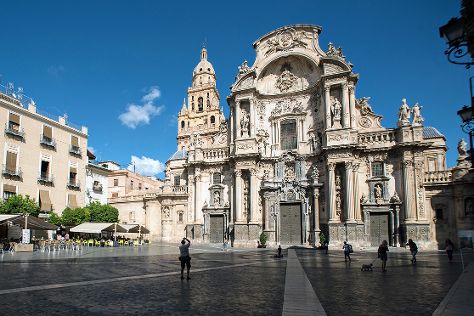 ©
Murcia is a city in south-eastern Spain, the capital and most populous city of the Autonomous Community of the Region of Murcia, and the seventh largest city in the country, with a population of 442,573 inhabitants in 2009 (about one third of the total population of the Region). Kick off your visit on the 6th (Mon): appreciate the extensive heritage of Plaza de las Flores, test your problem-solving skills at popular escape rooms, thencontemplate in the serene atmosphere at Cathedral de Santa Maria, thendon't miss a visit to Plaza Cardenal Belluga, and finally make a trip to Real Casino de Murcia. Keep things going the next day: kick back and relax at La Mata Beach and then see the interesting displays at Museo Del Teatro Romano.

To find where to stay, ratings, and more tourist information, read our Murcia trip itinerary maker.

You can drive from Granada to Murcia in 3 hours. Alternatively, you can take a bus; or take a train. Traveling from Granada in January, expect nights in Murcia to be about the same, around °C, while days are a bit warmer, around °C. Wrap up your sightseeing on the 7th (Tue) to allow time to drive to Valencia.
more less

Things to do in Murcia

For reviews, other places to visit, maps, and other tourist information, go to the Valencia day trip tool.

Getting from Murcia to Valencia by car takes about 2.5 hours. Other options: take a train; or take a bus. In January in Valencia, expect temperatures between °C during the day and °C at night. On the 8th (Wed), you're off to Barcelona.
more less

Things to do in Valencia

To see traveler tips, photos, and other tourist information, you can read our Barcelona trip maker app.

Traveling by flight from Valencia to Barcelona takes 3 hours. Alternatively, you can drive; or take a train. While traveling from Valencia, expect slightly colder days and about the same nights in Barcelona, ranging from highs of °C to lows of °C. Finish your sightseeing early on the 10th (Fri) to allow enough time to take a train to Madrid.
more less

On the 10th (Fri), explore the world behind art at Prado National Museum and then make a trip to Plaza Mayor.

For where to stay, maps, and tourist information, go to the Madrid trip planner.

Getting from Barcelona to Madrid by train takes about 3.5 hours. Other options: fly; or drive. In January, Madrid is little chillier than Barcelona - with highs of °C and lows of °C. Finish up your sightseeing early on the 10th (Fri) so you can travel back home.
more less