Start off your visit on the 3rd (Sat): explore the ancient world of Colosseum, then delve into the distant past at Palatine Hill, then head outdoors with Sabbianera Super Beach, and finally tour the pleasant surroundings at Moai Beach. Get ready for a full day of sightseeing on the next day: take in the spiritual surroundings of Vatican Museums, steep yourself in history at St. Peter's Basilica, appreciate the extensive heritage of Piazza Navona, delve into the distant past at Pantheon, then take a stroll through Via Condotti, and finally admire the local landmark of Trevi Fountain.

To see more things to do, ratings, and tourist information, refer to the Rome online trip itinerary maker .

Sharm El Sheikh, Egypt to Rome is an approximately 5-hour flight. You can also do a combination of flight and train; or drive. You'll gain 1 hour traveling from Sharm El Sheikh to Rome due to the time zone difference. When traveling from Sharm El Sheikh in October, plan for a bit cooler days in Rome, with highs around 73°F, while nights are colder with lows around 55°F. Cap off your sightseeing on the 5th (Mon) early enough to catch the train to Florence.
more less

Birthplace of the Italian Renaissance

Considered a cultural, artistic, and architectural jewel of Italy, Florence is the birthplace of the Italian Renaissance.

On the 5th (Mon), admire the masterpieces at Academy Of Florence Art Gallery, take in the spiritual surroundings of Cathedral of Santa Maria del Fiore, stop by Paolo Penko, then look for gifts at L'Arte dei Ciompi, then explore the world behind art at Gallerie Degli Uffizi, and finally look for gifts at Davide Cerasi Leather Boutique. Here are some ideas for day two: admire the masterpieces at Pitti Palace, make a trip to Piazzale Michelangelo, steep yourself in history at Basilica of Santa Croce, step into the grandiose world of Castello di Verrazzano, then get to know the fascinating history of Piazza del Duomo, and finally make a trip to Piazza della Signoria.

To see traveler tips, where to stay, maps, and more tourist information, refer to the Florence planning site .

You can take a train from Rome to Florence in 2 hours. Alternatively, you can drive; or fly. October in Florence sees daily highs of 71°F and lows of 54°F at night. Cap off your sightseeing on the 7th (Wed) early enough to catch the train to Venice.
more less

Things to do in Florence

Traveling by train from Florence to Venice takes 2.5 hours. Alternatively, you can drive; or take a bus. While traveling from Florence, expect slightly colder days and about the same nights in Venice, ranging from highs of 66°F to lows of 51°F. Cap off your sightseeing on the 9th (Fri) early enough to travel to Madrid.
more less

Padua
Find places to stay Oct 7 — 9:
Hotels on TripAdvisor
Homes on Airbnb
Highlights from your plan 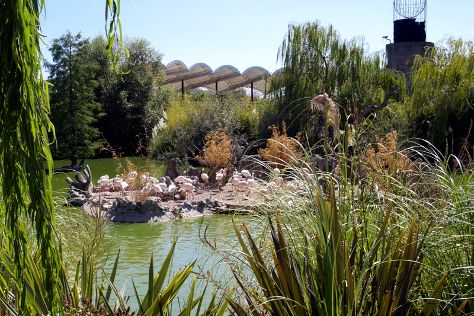 Head to Mercado San Miguel and Gran Viafor some retail therapy. Get a sense of the local culture at Prado National Museum and Museo Nacional Thyssen-Bornemisza. Go for a jaunt from Madrid to Toledo to see Catedral Primada about 1 hour away. Next up on the itinerary: don't miss a visit to Plaza Mayor, stop by Artestilo, walk around Parque del Retiro, and appreciate the extensive heritage of Barrio de Salamanca.

To find traveler tips, maps, other places to visit, and more tourist information, you can read our Madrid trip itinerary tool .

Fly from Venice to Madrid in 6 hours. Alternatively, you can do a combination of train and flight; or drive. Traveling from Venice in October, expect nights in Madrid to be about the same, around 53°F, while days are a bit warmer, around 73°F. Wrap up your sightseeing on the 12th (Mon) early enough to take a train to Barcelona.
more less

Escape the urban bustle at Sailing Experience Barcelona and Platja de la Nova Icaria. Give yourself a bit of retail therapy at La Boqueria and Passeig de Gracia. The adventure continues: take in the architecture and atmosphere at Basilica of the Sagrada Familia, walk around Parc Guell, admire the local landmark of The Magic Fountain, and don't miss a visit to Casa Mila - La Pedrera.

To find maps, other places to visit, photos, and more tourist information, go to the Barcelona trip planner.

You can take a train from Madrid to Barcelona in 3 hours. Other options are to fly; or drive. Expect a bit warmer evenings in Barcelona when traveling from Madrid in October, with lows around 60°F. Finish your sightseeing early on the 15th (Thu) to allow enough time to travel to Lisbon.
more less

Visiting Pypas Cruises Lisbon Boat Tours and Around Lisbon will get you outdoors. Your cultural itinerary includes sights like Museu Calouste Gulbenkian and Belém Tower. Get out of town with these interesting Lisbon side-trips: Quinta da Regaleira (in Sintra) and Cabo da Roca (in Colares). The adventure continues: wander the streets of Avenida da Liberdade, look for gifts at A Outra Face da Lua, pick up some new kitchen skills with Time Out Market Lisboa, and stop by Alfama.