Kick off your visit on the 18th (Fri): explore the striking landscape at Devil's Door (Puerta del Diablo), then stop by El Arbol de Dios, and then get impressive views of Volcan San Salvador.

To see traveler tips, other places to visit, and tourist information, go to the San Salvador trip planner.

Washington DC, USA to San Salvador is an approximately 6- hour combination of bus and flight. You can also do a combination of train and flight; or drive. The time zone difference moving from Eastern Standard Time to Central Standard Time is minus 1 hour. Expect a bit warmer temperatures when traveling from Washington DC in October; daily highs in San Salvador reach 85°F and lows reach 69°F. Finish your sightseeing early on the 19th (Sat) to allow enough time to drive to La Libertad.
more less

The coastal town of La Libertad combines grittiness with beachside tranquility to create one of the most popular tourist destinations in the country.

Visiting El Sunzal and Tamanique Waterfalls will get you outdoors. Step out of La Libertad to go to La Herradura and see Tasajera Island, which is approximately 1h 35 min away. The adventure continues: identify plant and animal life at Furesa Fundacion Refugio Salvaje and get outside with Atami Escape Resort.

To find maps, more things to do, ratings, and other tourist information, use the La Libertad online trip itinerary maker.

Traveling by car from San Salvador to La Libertad takes an hour. Alternatively, you can take a bus. In October, daytime highs in La Libertad are 88°F, while nighttime lows are 74°F. On the 22nd (Tue), you're off to Ahuachapan.
more less

Things to do in La Libertad

©
Ahuachapán is a city and municipality and the capital of the Ahuachapán Department in western El Salvador. Termales de Santa Teresa has been added to your itinerary. Escape the urban bustle at El Imposible National Park and Salto De Malacatiupan.

To see other places to visit, maps, more things to do, and other tourist information, read Ahuachapan trip builder tool.

Traveling by car from La Libertad to Ahuachapan takes 2 hours. Alternatively, you can take a bus. In October in Ahuachapan, expect temperatures between 85°F during the day and 70°F at night. On the 27th (Sun), you're off to Monterrico.
more less

Things to do in Ahuachapan

©
Auto Safari Chapin has been added to your itinerary. Kick off your visit on the 28th (Mon): get to know the resident critters at Auto Safari Chapin, cool off at Parque Acuatico H2Olas, and then identify plant and animal life at Biotopo Monterrico-Hawaii.

Traveling by car from Ahuachapan to Monterrico takes 4.5 hours. In October, daytime highs in Monterrico are 89°F, while nighttime lows are 73°F. On the 29th (Tue), you're off to Antigua.
more less

Things to do in Monterrico 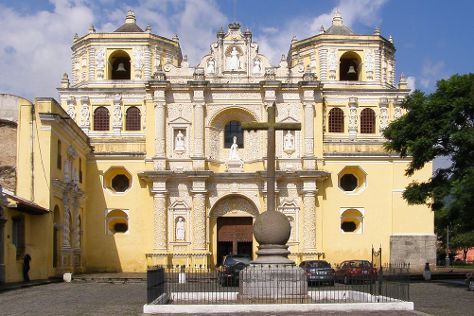 The former capital of Guatemala and a World Heritage Site, Antigua retains its colonial charm and remains one of the most visited destinations in the country.

Start off your visit on the 29th (Tue): take in the architecture and atmosphere at Iglesia de La Merced and then relax and rejuvenate at some of the best spas.

To see where to stay, ratings, maps, and tourist information, go to the Antigua trip builder tool.

Traveling by car from Monterrico to Antigua takes 2 hours. Alternatively, you can take a shuttle; or take a bus. Prepare for slightly colder weather when traveling from Monterrico in October: high temperatures in Antigua hover around 76°F and lows are around 61°F. Wrap up your sightseeing on the 29th (Tue) to allow time to travel to Santa Cruz La Laguna.
more less

Things to do in Antigua

To see maps, where to stay, other places to visit, and more tourist information, use the Santa Cruz La Laguna online travel planner.

You can do a combination of bus and taxi from Antigua to Santa Cruz La Laguna in 2 hours. Other options are to drive; or do a combination of shuttle and ferry. Expect little chillier evenings in Santa Cruz La Laguna when traveling from Antigua in October, with lows around 56°F. Finish up your sightseeing early on the 30th (Wed) so you can go by car to Panajachel.
more less

Things to do in Santa Cruz La Laguna

A little town with a thriving tourism industry, Panajachel sits on the northern shore of scenic Atitlan Lake, one of Guatemala's major vacation destinations.

Start off your visit on the 30th (Wed): pause for some serene contemplation at Church of St Francis.

You can drive from Santa Cruz La Laguna to Panajachel in an hour. In October, daily temperatures in Panajachel can reach 76°F, while at night they dip to 61°F. Wrap up your sightseeing on the 30th (Wed) to allow time to ride a ferry to San Pedro La Laguna.
more less

Things to do in Panajachel

Sitting at the base of the volcano of the same name, San Pedro La Laguna has a particularly lively and international atmosphere, attracting tourists from across the world with its lakeside and volcanic scenery, nightlife, and wealth of budget accommodations.

To find more things to do, maps, ratings, and other tourist information, refer to the San Pedro La Laguna travel itinerary planner.

Things to do in San Pedro La Laguna 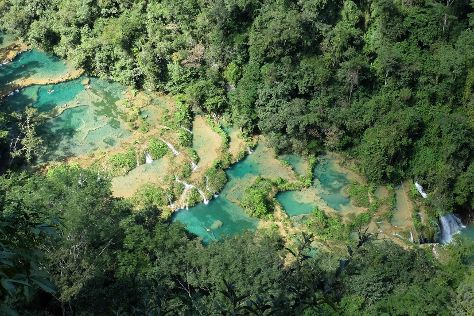 ©
San Agustín Lanquín, often referred to simply as Lanquín, is a municipality in the Guatemalan department of Alta Verapaz. Your day-by-day itinerary now includes Grutas Las Marias, Lanquin Caves and Monumento Natural Semuc Champey. Start off your visit on the 31st (Thu): contemplate the waterfront views at Monumento Natural Semuc Champey, then Head underground at Grutas Las Marias, and then Head underground at Lanquin Caves.

You can drive from San Pedro La Laguna to Lanquin in 6 hours. Alternatively, you can do a combination of shuttle and bus; or do a combination of taxi and bus. Traveling from San Pedro La Laguna in October, expect Lanquin to be a bit warmer, temps between 90°F and 74°F. On the 31st (Thu), you'll have the morning to explore before heading off to Guatemala City.
more less

Things to do in Lanquin

Your day-by-day itinerary now includes La Aurora Zoo. On the 31st (Thu), take an in-depth tour of Palacio Nacional, then get to know the resident critters at La Aurora Zoo, then don't miss a visit to Plaza Espana, and finally contemplate in the serene atmosphere at Catedral Metropolitana. Here are some ideas for day two: see the interesting displays at Museo Ixchel del Traje Indigena, contemplate the geological forces at Volcan de Fuego, and then wander the streets of Zona Viva.

To see more things to do, reviews, photos, and other tourist information, go to the Guatemala City trip itinerary maker tool.

You can drive from Lanquin to Guatemala City in 5 hours. Other options are to take a shuttle; or take a bus. Plan for a bit cooler temperatures traveling from Lanquin in October, with highs in Guatemala City at 76°F and lows at 61°F. Cap off your sightseeing on the 1st (Fri) early enough to travel to Concepcion de Ataco.
more less

Things to do in Guatemala City

©
Concepción de Ataco is a municipality and city within the Ahuachapán Department, El Salvador. Apaneca Canopy Tour has been added to your itinerary. Start off your visit on the 2nd (Sat): look for gifts at Axul and then head outdoors with Apaneca Canopy Tour.

For maps, photos, ratings, and other tourist information, use the Concepcion de Ataco trip planner.

You can drive from Guatemala City to Concepcion de Ataco in 3 hours. In November, daily temperatures in Concepcion de Ataco can reach 76°F, while at night they dip to 64°F. Wrap up your sightseeing by early afternoon on the 2nd (Sat) to allow enough time to drive back home.
more less

Things to do in Concepcion de Ataco