You've added Placa Reial, Pont del Bisbe, Parc de Montjuic, and other attractions to your itinerary. The adventure continues: admire the landmark architecture of Basilica of the Sagrada Familia, take a stroll through El Barri Gòtic, don't miss a visit to The Magic Fountain, and stop by Las Ramblas.

Your list of things to see and do now includes Sobrino de Botin, Templo de Debod, Plaza de Toros de Las Ventas, and other attractions. There's much more to do: stroll around Parque del Retiro, don't miss a visit to Plaza de Oriente, and contemplate the long history of Royal Palace of Madrid.

For where to stay, more things to do, reviews, and more tourist information, go to the Madrid trip planner.

Take a train from Barcelona to Madrid in 3.5 hours. Alternatively, you can fly; or drive. When traveling from Barcelona in June, plan for a bit warmer days and little chillier nights in Madrid: temperatures range from 36°C by day to 19°C at night. Finish your sightseeing early on the 9th (Tue) to allow enough time to travel to Seville.
more less

To find reviews, other places to visit, traveler tips, and tourist information, go to the Seville sightseeing planner.

Traveling by flight from Madrid to Seville takes 3.5 hours. Alternatively, you can take a train; or drive. In June, daytime highs in Seville are 35°C, while nighttime lows are 20°C. On the 12th (Fri), you'll have the morning to explore before heading off to Malaga.
more less

You've added Castillo de Gibralfaro, Fundacion Picasso - Museo Natal, La Calle Larios, and other attractions to your itinerary. Change things up with a short trip to Balcony of Europe in Nerja (about 50 minutes away). Next up on the itinerary: get engrossed in the history at Alcazaba, contemplate the long history of Malaga Cathedral, delve into the distant past at Teatro Romano, and make a trip to Plaza de la Merced.

To find other places to visit, photos, more things to do, and other tourist information, read Malaga itinerary builder.

Getting from Seville to Malaga by car takes about 2.5 hours. Other options: take a bus; or take a train. June in Malaga sees daily highs of 34°C and lows of 21°C at night. On the 15th (Mon), you'll have the morning to explore before heading off to Granada.
more less

Balcony of Europe
Find places to stay Jun 12 — 15:
Hotels on TripAdvisor
Homes on Airbnb
Highlights from your plan

Hammam Al Andalus Granada has been added to your itinerary. On the 15th (Mon), take a stroll through Albayzin, don't miss a visit to Carrera del Darro, contemplate in the serene atmosphere at Royal Chapel of Granada, then don't miss a visit to Plaza de Isabel La Catolica, and finally appreciate the extensive heritage of Mirador de San Nicolas. Keep things going the next day: step into the grandiose world of Nasrid Palaces, then admire the natural beauty at Generalife, then explore the historical opulence of Alhambra, and finally soak in style at Hammam Al Andalus Granada.

You can drive from Malaga to Granada in 2 hours. Other options are to take a bus; or take a train. In June in Granada, expect temperatures between 35°C during the day and 19°C at night. On the 17th (Wed), you're off to Palma de Mallorca.
more less

Cultural Capital of the Balearic Islands

Majorca, or Mallorca, is largest island in the Balearic Islands archipelago.

Things to do in Palma de Mallorca 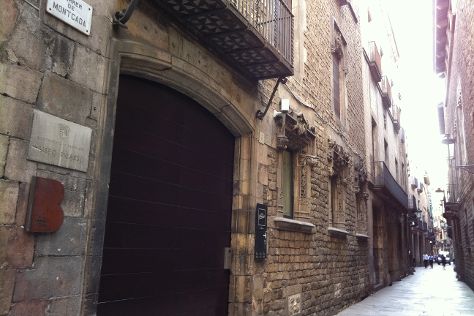 Your day by day itinerary now includes Centro Comercial Arenas De Barcelona, Placa d'Espanya and Arc de Triomf. Start off your visit on the 21st (Sun): pause for some photo ops at Arc de Triomf, then appreciate the extensive heritage of Carrer de Montcada, then make a trip to Placa d'Espanya, and finally buy something for everyone on your list at Centro Comercial Arenas De Barcelona.

To see more things to do, photos, and other tourist information, read our Barcelona online attractions planner.

Traveling by flight from Palma de Mallorca to Barcelona takes 3 hours. Alternatively, you can ride a ferry; or do a combination of bus and ferry. On the 22nd (Mon), you're off to home.
more less