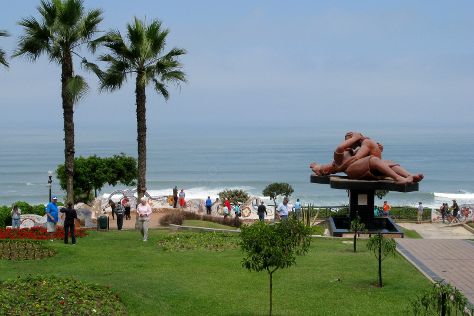 City of the Kings

Founded in 1535 by Spanish explorer Francisco Pizarro, Lima represents an interesting blend of modern attractions and preserved colonial architecture, much of it clustered in the World Heritage-listed city center.

On the 7th (Thu), don't miss a visit to Faro La Marina, look for gifts at Kani, explore the world behind art at Museo MATE, then stroll around El Parque del Amor, then wander the streets of Miraflores, and finally don't miss a visit to Plaza de Armas (Plaza Mayor). On the next day, pause for some serene contemplation at Cathedral of Lima, get to know the fascinating history of Centro Historico de Lima, take in the architecture and atmosphere at Iglesia y Convento de San Francisco, indulge in some personalized pampering at some of the best spas, then walk around Parque Kennedy - Parque Central de Miraflores, and finally stroll around Circuito Magico Del Agua.

For reviews, traveler tips, and other tourist information, refer to the Lima vacation builder site.

Tallahassee, USA to Lima is an approximately 12-hour flight. When traveling from Tallahassee in May, plan for slightly colder days and about the same nights in Lima: temperatures range from 73°F by day to 65°F at night. Finish your sightseeing early on the 8th (Fri) to allow enough time to drive to Paracas.
more less

Things to do in Lima

Parks Historic Sites Museums
Find places to stay May 6 — 8:
Hotels on TripAdvisor
Homes on Airbnb
Highlights from your plan 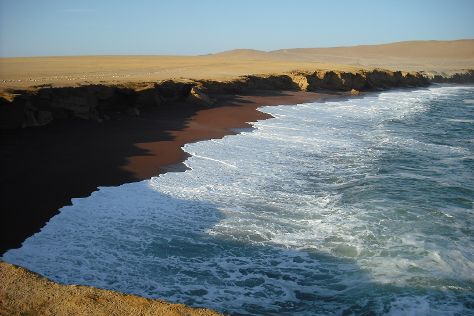 A port town largely devoted to tourism, Paracas serves as a popular starting point for exploration of Peru's south coast.

Start off your visit on the 9th (Sat): examine the collection at Museo De Sitio Julio C Tello De Paracas, deepen your understanding at Ballestas Islands, then have fun and explore at Culturides La Maquina del Tiempo, then see Off-Road Tours, and finally view the masterpieces at Pukasoncco, Arte Precolombino.. Keep things going the next day: don't miss a visit to The Chandelier, then enjoy the sand and surf at Playa Roja, then admire nature's extreme beauty at Paracas Nature Reserve, and finally take some stellar pictures from La Catedral.

You can drive from Lima to Paracas in 3.5 hours. Alternatively, you can take a bus. Expect a daytime high around 75°F in May, and nighttime lows around 61°F. Finish your sightseeing early on the 10th (Sun) to allow enough time to drive to Nazca.
more less

Things to do in Paracas

Ballestas Islands
Find places to stay May 8 — 10:
Hotels on TripAdvisor
Homes on Airbnb
Highlights from your plan

The southern city of Nazca draws visitors to its archaeological and historical sites.

On the 11th (Mon), stop by Taller de Ceramicas Emilia, stroll the grounds of Cementerio Chauchilla, then make a trip to Ceramicas LASC, then explore the engaging exhibits at Casa del Inka - Museo Incawasi, and finally delve into the distant past at Cantalloc Aqueduct.

To find ratings, other places to visit, where to stay, and tourist information, read Nazca trip itinerary maker app.

You can drive from Paracas to Nazca in 3.5 hours. Alternatively, you can take a bus. Finish up your sightseeing early on the 11th (Mon) so you can go by car to Arequipa.
more less

Things to do in Nazca

Historic Sites Shopping
Find places to stay May 10 — 11:
Hotels on TripAdvisor
Homes on Airbnb
Highlights from your plan 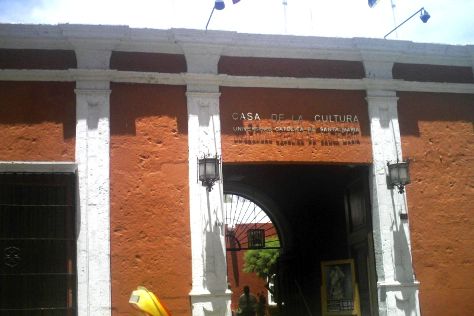 Start off your visit on the 12th (Tue): steep yourself in history at Historic Centre of Arequipa, see the interesting displays at Santa Catalina Monastery, then take in the architecture and atmosphere at Museo de la Catedral de Arequipa, then get engrossed in the history at Museo Santuarios Andinos, and finally appreciate the extensive heritage of Iglesia de la Compania de Jesus. Here are some ideas for day two: see the interesting displays at MUVI Museo Vivencial del Vino y Pisco, get outside with Outdoor Activities, look for gifts at Alpaca AB, then get impressive views of Volcan Misti, and finally explore the engaging exhibits at FBC Melgar.

To see reviews, more things to do, ratings, and more tourist information, use the Arequipa visit planning tool.

Getting from Nazca to Arequipa by car takes about 7 hours. Other options: take a bus; or do a combination of bus and flight. In May, daytime highs in Arequipa are 69°F, while nighttime lows are 48°F. Finish your sightseeing early on the 13th (Wed) so you can drive to Puno.
more less

Things to do in Arequipa

Museums Historic Sites Tours
Find places to stay May 11 — 13:
Hotels on TripAdvisor
Homes on Airbnb
Highlights from your plan 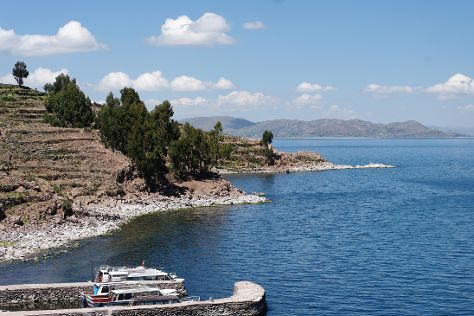 City of the Lake

Hugging the western tip of Lake Titicaca, Puno serves as a melting pot of indigenous and imported cultures, and makes a great base for explorations around the region.

For where to stay, ratings, photos, and tourist information, you can read our Puno trip planning tool.

You can drive from Arequipa to Puno in 4.5 hours. Another option is to take a bus. Traveling from Arequipa in May, Puno is a bit cooler at night with lows of 29°F. Finish your sightseeing early on the 15th (Fri) to allow enough time to travel to Cusco.
more less

Things to do in Puno

Lake Titicaca
Find places to stay May 13 — 15:
Hotels on TripAdvisor
Homes on Airbnb
Highlights from your plan

Eschew the tourist crowds and head to Horseback Riding Tours and exploor. Change things up with these side-trips from Cusco: Urubamba (Iglesia de Urubamba & Cerveceria Willkamayu). There's lots more to do: explore the ancient world of Sacred Valley of the Incas, get outside with Outdoor Activities, contemplate the long history of Tipon, and relax and rejuvenate at some of the best spas.

To find where to stay, other places to visit, more things to do, and tourist information, read Cusco trip itinerary tool.

Traveling by combination of bus and flight from Puno to Cusco takes 3 hours. Alternatively, you can drive; or take a bus. Expect a bit warmer evenings in Cusco when traveling from Puno in May, with lows around 39°F. Finish your sightseeing early on the 19th (Tue) so you can travel to Machu Picchu.
more less

Things to do in Cusco

Urubamba, Sacred Valley of the Incas
Find places to stay May 15 — 19:
Hotels on TripAdvisor
Homes on Airbnb
Highlights from your plan 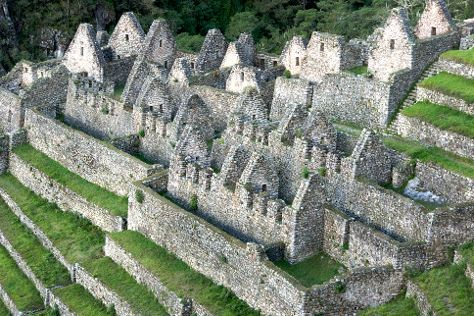 A symbol of the Incan civilization, the abandoned city of Machu Picchu represents a must-see on a Peru vacation.

On the 20th (Wed), admire the natural beauty at Mariposario de Machupicchu, take some stellar pictures from Intipuncu, and then steep yourself in history at Santuario Historico de Machu Picchu. Get ready for a full day of sightseeing on the next day: delve into the distant past at Winay Wayna, take in nature's colorful creations at Los Jardines de Mandor, then don't miss a visit to Plaza Manco Capac, and finally kick your exploration up a notch at categoryPhrases.alias.some_of_the_top_local_zipline_courses_and_adventure_parks.

Traveling by combination of bus and train from Cusco to Machu Picchu takes 3.5 hours. Alternatively, you can take a train; or drive. Finish your sightseeing early on the 21st (Thu) to allow enough time to travel to Maras.
more less

Things to do in Machu Picchu

Zipline
Find places to stay May 19 — 21:
Hotels on TripAdvisor
Homes on Airbnb
Highlights from your plan 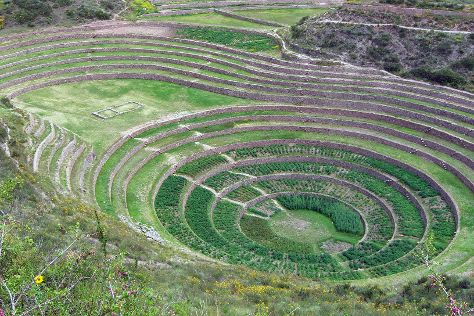 ©
Maras is a town in the Sacred Valley of the Incas, 40 kilometers north of Cuzco, in the Cuzco Region of Peru. Kick off your visit on the 22nd (Fri): make a trip to Balcon del Inka, delve into the distant past at Complejo Arqueologico Chinchero, then explore the striking landscape at Salinas de Maras, and finally delve into the distant past at Moray.

To see other places to visit, traveler tips, reviews, and tourist information, go to the Maras online holiday planner.

Getting from Machu Picchu to Maras by combination of train and taxi takes about 2.5 hours. Other options: drive. Expect a daytime high around 69°F in May, and nighttime lows around 39°F. Wrap up your sightseeing on the 22nd (Fri) to allow time to travel to Trujillo.
more less

Things to do in Maras

Chinchero
Find places to stay May 21 — 22:
Hotels on TripAdvisor
Homes on Airbnb
Highlights from your plan 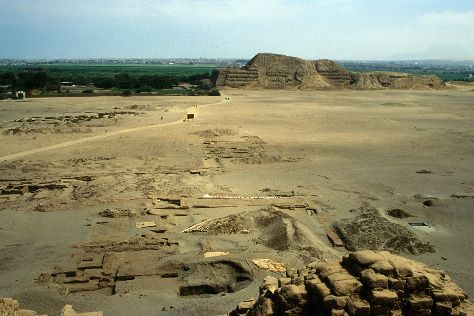 Considered the country's capital of culture, Trujillo was the birthplace of the North Group, a community of artists and intellectuals that included celebrated poet Cesar Vallejo and notable novelist Ciro Alegria.

Start off your visit on the 23rd (Sat): don't miss a visit to Plaza de Armas de Trujillo, contemplate the long history of La Huaca del Sol, then explore the world behind art at Museo de Arte Moderno, then get engrossed in the history at Cao Museum, and finally stop by Corazon Verde. On your second day here, explore the ancient world of Site Museum, pause for some serene contemplation at Catedral de Trujillo - Catedral de Santa Maria, then contemplate the long history of Chan Chan, and finally steep yourself in history at Huaca El Dragon.

For traveler tips, more things to do, where to stay, and more tourist information, refer to the Trujillo trip builder website.

Things to do in Trujillo

Capital of the Peruvian Amazon

The largest city in the Peruvian Amazon and the world's largest metropolis unreachable by road, Iquitos represents a major starting point for river and rainforest adventures.

On the 25th (Mon), get a dose of the wild on a nature and wildlife tour, stroll through La Isla De Los Monos, stroll through Amazon Rescue Center, then browse the fresh offerings at Mercado de Belen, and finally stroll through Pilpintuwasi Butterfly Farm. On your second day here, take a tour by water with Boat Tours & Water Sports and then explore the activities along Amazon River.

To see more things to do, traveler tips, reviews, and tourist information, use the Iquitos tour planner.

Traveling by flight from Trujillo to Iquitos takes 5.5 hours. Alternatively, you can do a combination of bus, ferry, and taxi. Prepare for somewhat warmer weather when traveling from Trujillo in May: high temperatures in Iquitos hover around 89°F and lows are around 73°F. Wrap up your sightseeing on the 27th (Wed) to allow time to travel back home.
more less

Things to do in Iquitos