Barcelona is known for sightseeing, parks, museums, nightlife, and shopping. Your plan includes some of its best attractions: admire the landmark architecture of La Sagrada Familia, see the interesting displays at Picasso Museum, ponder the design of Magic Fountain (Font Magica), and pause for some serene contemplation at Barcelona Cathedral.

London, UK to Barcelona is an approximately 5-hour flight. You can also take a train; or take a bus. You'll lose 1 hour traveling from London to Barcelona due to the time zone difference. Traveling from London in May, things will get somewhat warmer in Barcelona: highs are around 25°C and lows about 17°C. Finish your sightseeing early on the 6th (Tue) so you can travel to Seville.
more less

Seville is known for sightseeing, parks, nightlife, museums, and historic sites. Your plan includes some of its best attractions: take in nature's colorful creations at Royal Alcázar of Seville, admire the striking features of Seville Cathedral (Catedral de Sevilla), take a stroll through Triana, and steep yourself in history at Plaza de Espana.

To find reviews, traveler tips, more things to do, and tourist information, you can read our Seville travel itinerary creator.

You can fly from Barcelona to Seville in 3.5 hours. Alternatively, you can take a train; or drive. When traveling from Barcelona in June, plan for somewhat warmer days and about the same nights in Seville: temperatures range from 35°C by day to 19°C at night. You'll have a few hours on the 9th (Fri) to wrap things up before traveling to Cordoba.
more less

Cordoba is known for sightseeing, historic sites, museums, religious sites, and nightlife. Your plan includes some of its best attractions: take in the spiritual surroundings of Museo Mezquita Catedral de Córdoba, make a trip to Historic Centre of Cordoba, contemplate the long history of Alcazar de los Reyes Cristianos, and get engrossed in the history at Calahorra Tower.

To find reviews, maps, more things to do, and other tourist information, read our Cordoba vacation planner.

Traveling by train from Seville to Cordoba takes an hour. Alternatively, you can drive; or take a bus. Expect a bit warmer weather when traveling from Seville in June: highs in Cordoba hover around 39°C, while lows dip to 19°C. Finish up your sightseeing early on the 12th (Mon) so you can catch the train to Ronda.
more less

Take a train from Cordoba to Ronda in 2 hours. Alternatively, you can drive. June in Ronda sees daily highs of 37°C and lows of 19°C at night. You'll have a few hours on the 12th (Mon) to wrap things up before traveling to Granada.
more less
Find places to stay Jun 12 — 13:
Hotels on TripAdvisor
Homes on Airbnb
Highlights from your plan

Step out of Granada with an excursion to Fundación Cueva de Nerja in Nerja--about 1h 10 min away. There's much more to do: admire the striking features of Alhambra, tour the pleasant surroundings at Generalife, appreciate the extensive heritage of Mirador de San Nicolas, and take in the spiritual surroundings of Cathedral and Royal Chapel (Capilla Real).

For ratings, other places to visit, photos, and other tourist information, read Granada holiday planner.

Drive from Ronda to Granada in 2.5 hours. Alternatively, you can drive; or take a train. Traveling from Ronda in June, you will find days in Granada are little chillier (33°C), and nights are about the same (17°C). You will have some time to spend on the 15th (Thu) before leaving for Malaga.
more less

To see more things to do, reviews, maps, and other tourist information, read our Malaga itinerary maker.

You can drive from Granada to Malaga in 1.5 hours. Alternatively, you can drive; or take a bus. Traveling from Granada in June, you can expect nighttime temperatures to be somewhat warmer in Malaga, with lows of 21°C. Wrap up your sightseeing on the 21st (Wed) early enough to travel to Barcelona.
more less 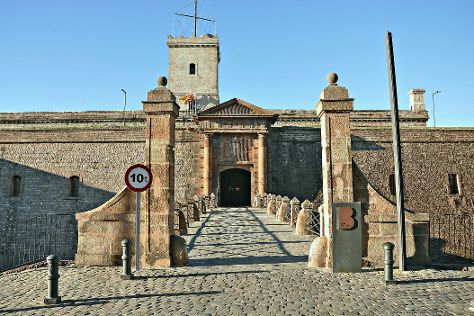 Start off your visit on the 21st (Wed): test your problem-solving skills at popular escape rooms and then indulge in some culinary diversions at a local gastronomic tour. Get ready for a full day of sightseeing on the next day: see the interesting displays at Parc de Montjuic, then explore the historical opulence of Montjuic Castle, then admire the landmark architecture of El Pabellón de Barcelona, and finally take a stroll through Passeig de Gracia.

To see more things to do, photos, ratings, and tourist information, you can read our Barcelona travel planner.

Traveling by flight from Malaga to Barcelona takes 3.5 hours. Alternatively, you can take a train; or drive. Expect a bit cooler weather when traveling from Malaga in June: highs in Barcelona hover around 30°C, while lows dip to 22°C. You will have some time to spend on the 23rd (Fri) before leaving for home.
more less