To find maps, photos, traveler tips, and other tourist information, use the Cordoba trip itinerary website.

Tel Aviv, Israel to Cordoba is an approximately 11-hour flight. The time zone difference when traveling from Tel Aviv to Cordoba is minus 1 hour. While traveling from Tel Aviv, expect a bit warmer days and little chillier nights in Cordoba, ranging from highs of 40°C to lows of 19°C. Wrap up your sightseeing on the 22nd (Mon) early enough to drive to Granada.
more less

Start off your visit on the 23rd (Tue): look for gifts at La Talega, appreciate the extensive heritage of Mirador de San Nicolas, then take in the spiritual surroundings of Mezquita Mayor de Granada, then stop by Albayzin, and finally contemplate in the serene atmosphere at Monasterio Cartuja. On the next day, make a trip to La Silla Del Moro, take in nature's colorful creations at Generalife, then get the lay of the land with Walking tours, and finally contemplate in the serene atmosphere at Royal Chapel of Granada.

To find maps, ratings, other places to visit, and other tourist information, read our Granada road trip site.

Getting from Cordoba to Granada by car takes about 2.5 hours. Other options: take a train; or take a bus. Traveling from Cordoba in June, you will find days in Granada are a bit cooler (35°C), and nights are about the same (19°C). Wrap up your sightseeing on the 24th (Wed) early enough to drive to Gibraltar.
more less 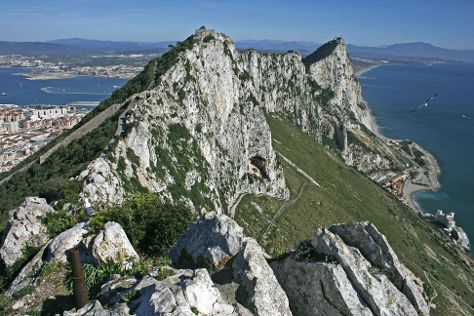 A vacation in Gibraltar reveals a strategically important area the ancient Greeks considered the edge of the known world.

On the 25th (Thu), contemplate in the serene atmosphere at Cathedral of St Mary the Crowned, then get a sense of history and politics at The Convent, and then take in the dramatic natural features at The Rock of Gibraltar.

You can drive from Granada to Gibraltar in 3 hours. Alternatively, you can do a combination of train and bus; or take a bus. Traveling from Granada in June, expect nights in Gibraltar to be about the same, around 22°C, while days are little chillier, around 30°C. Wrap up your sightseeing by early afternoon on the 25th (Thu) to allow enough time to travel back home.
more less

Things to do in Gibraltar

©
The Rock of Gibraltar

©
Cathedral of St Mary the Crowned