Your day-by-day itinerary now includes Dihua Street, Shifen Old Street, Chiufen (Jiufen Old Street), and other attractions you added. On the 10th (Fri), witness a stunning natural landmark at Beitou Hot Spring, buy something for everyone on your list at Q Square, wander the streets of Ximending, stop by ATT 4 FUN, then buy something for everyone on your list at Taipei 101, and finally browse the eclectic array of goods at Shilin Night Market. Get ready for a full day of sightseeing on the next day: hunt for treasures at Chiufen (Jiufen Old Street), don't miss a visit to Shifen Old Street, then stop by Wu Fen Pu (Wufenpu Garment Wholesale Area), then hunt for treasures at Raohe Street Night Market, and finally stop by Pacific Sogo Fuxing Branch 太平洋Sogo 復興館.

Plan my Taipei trip by asking Inpirock to come up with tips and suggestions.

If you are flying in from Singapore, the closest major airports are Taiwan Taoyuan International Airport, Taipei Songshan Airport and Taichung Ching Chuang Kang Airport. In January in Taipei, expect temperatures between 22°C during the day and 16°C at night. Cap off your sightseeing on the 12th (Sun) early enough to travel to Taichung.
more less 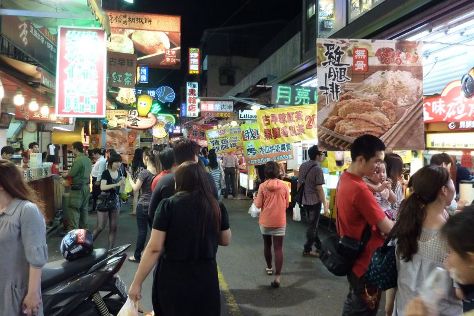 You've added SOGO Taichung, Yichung Shopping Street, Taroko Mall, and other attractions to your itinerary. On the 12th (Sun), buy something for everyone on your list at Taroko Mall and then stop by Yichung Shopping Street. On the 13th (Mon), you'll have a packed day of sightseeing: wander the streets of Rainbow Village Taichung, explore the wide array of goods at SOGO Taichung, then look for gifts at Shin Kong Mitsukoshi Taichung Zhonggang, and finally look for gifts at FengJia Night Market.

To find where to stay, maps, more things to do, and tourist information, read Taichung journey site .

You can take a train from Taipei to Taichung in 2 hours. Alternatively, you can drive; or take a bus. January in Taichung sees daily highs of 22°C and lows of 14°C at night. Wrap up your sightseeing by early afternoon on the 14th (Tue) to allow enough time to drive back home.
more less

Zhongli
Find places to stay Jan 12 — 14:
Hotels on TripAdvisor
Homes on Airbnb
Highlights from your plan